With hundreds of new chemicals registered everyday, and many of them untested with respect to public health and environmental impact, emerging contaminants are a big issue growing at a rapid rate.

In order to help keep up with this changing chemical landscape, Eurofins has launched QToF-MS Discovery Suite – a new analytical tool for comprehensive characterisation and discovery of new compounds in complex samples.

Eurofins Regional Technical Manager Dr Bob Symons said targeted analysis of samples is very useful when it comes to identifying certain compounds, but non-targeted analysis is opening the door to discovering and analysing potentially harmful compounds that are not yet known.

“Targeted analysis involves tuning the instruments so that they become very effective at picking up particular compounds. Traditionally, analytical chemists have been looking at particular compounds, whether it’s contaminants in food, water or air,” he said.

“We are very good at doing this via targeted analysis. But we now have some very smart chemists who are able to change the identity of some of these compounds.

“What’s more, many compounds naturally transform their chemical structure, either in the body or the environment, creating new compounds that we don’t know about.”

“Non-target analysis takes the full spectrum of the compound’s structure. It means that, in the case of designer drugs or new contaminants, we are able to do some data mining and pick up whether it’s there or not.”

Symons said that while targeted analysis is still a crucial tool for chemical analysis, non-targeted analysis helps to uncover unknowns within highly complex samples, including the myriad of new PFAS compounds causing strife for water service providers and land managers.

“Targeted analysis helps us to identify and quantify known knowns. But, when it comes to emerging contaminants, it’s the unknown unknowns that we want to find. And that’s exactly what QToF-MS helps us do,” he said.

“PFAS is a good example. There’s probably 20 million PFAS compounds in the latest figures. But when we do targeted chemical analysis, we are only screening for about 30. There is a whole missing mass. And the only way we can find those is to use this new technique.”

Symons said QToF-MS is breaking new ground in the field of chemical analysis, with a lot of university researchers using the technique, as well as the United States’ Environmental Protection Agency.

“Non-targeted analysis is currently being utilised around the world to pick up new PFAS compounds that we never knew existed. Once they are located, we can then use some targeted analysis to do quantification,” he said.

“You can still use time-of-flight mass spectrometry to measure compounds, but using targeted analysis in conjunction with non-targeted analysis helps to provide a more sensitive and selective way of analysing these samples.”

Symons said a lot of the samples Eurofins are working on are very complex, especially when it comes to wastewater, and non-target analysis has huge potential to help bolster the uptake of recycled water schemes.

“As wastewater managers know, there are a lot of different contaminants they have to treat. And, as we are seeing in Singapore and California, there is a lot of recycled water being used to supplement drinking water supplies,” he said.

“Making sure we can get rid of any contaminants that could pose a risk to public health is of primary concern when we are looking to utilise purified recycled water for potable reuse.”

Aside from uncovering emerging contaminants that have not yet been registered, Symons said QToF-MS is also very useful for historic analysis of sample data – a development that could transform how contaminants are studied.

“The advantage of this particular technique is that you can go back a week, or a month or a year, and interrogate historic data with this non-targeted approach. You don’t need to re-extract the samples,” he said.

“This could be a great approach for water professionals who are looking to do risk assessments and need some insight into how long certain contaminants have been around. It can be very helpful to know whether a new contaminant has been around for five years, five months or five days.

“We can now go back and data-mine the outputs from past sampling, so long as those samples have been taken properly. And we can start this type of work in areas of concern in the water sector.”

“It’s a gateway to a whole range of new research. It’s the beginning of a new way of analytical chemistry that will be available to us in future,” he said.

“It’s a very complex technique. You can get very forensic, and there’s the potential also to reverse engineer chemical products. But for the water sector in particular, this is all about the ability to really harness historical data in pursuit of emerging contaminants.”

With groups all over the world, Symons said Eurofins is currently facilitating a focus group dedicated to developing non-targeted analysis further.

“We are the only commercial laboratory offering this service at the moment. We have four major labs here in Australia, and we only have one of these instruments. But we believe this is going to be the future of analytical chemistry and how it will develop in light of emerging contaminants,” he said.

“We are still in the embryonic stages of this journey and we have a lot to learn. For example, targeted analysis takes around 30 minutes, and this new approach can take 30 hours.

“There are some advances coming up with machine learning and artificial intelligence. We think that’s going to help on the data mining side of things. We hope that’ll improve the turnaround time.”

Symons said the issue of emerging contaminants is like an iceberg: “We are really only seeing the top of it”.

“But this new approach offers the opportunity to reach for a much higher level of visibility.” 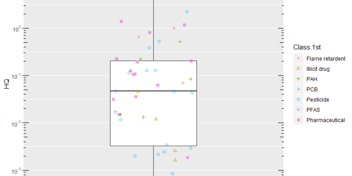 Water Source
Emerging contaminants are chemicals contained in household and industry products used by Australians every day. Some of these… Read Full Paper

Water Source
Flushing disposable contact lenses down the sink or toilet is contributing to the world’s growing microplastic problem, according… Read Full Paper

Keep up with contaminants of emerging concern