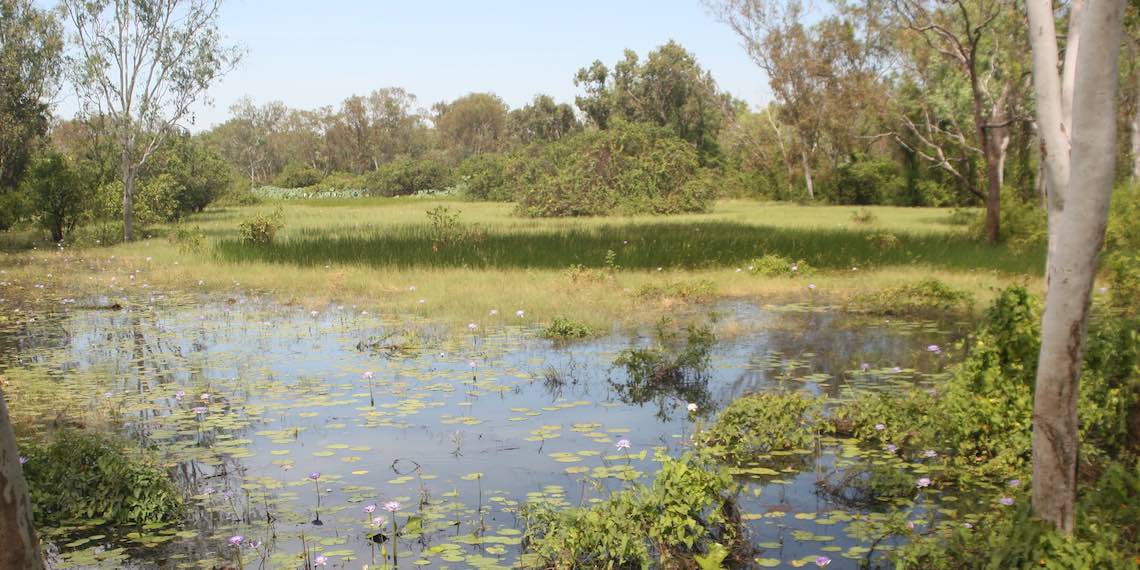 Increasing streamflow in the Northern Territory’s Daly catchment has instigated proposals for further development of agricultural industry, but a recent paleo-climate streamflow study suggests water allocations based on recent instrumental data may end up being too high.

Using tree-ring data from cores collected at 63 different sites, the University of New South Wales research reconstructed 600 years of paleo-streamflow and found that streamflow in the Daly catchment has been higher since the 1960s than at any other point since 1413.

However, less is known about extremes in low streamflow events, including the recent examples of failed monsoon seasons in 2019 and 2020, which resulted in water restrictions for Katherine.

UNSW PhD candidate Philippa Higgins said if flows return to lower levels in future, taking large volumes of water could cause problems for the river.

“We found that the recent increase in streamflow in the Daly catchment is likely related to increasing monsoon rainfall, and that there is a link between high flows and La Niña events,” she said.

“Moving forward with water allocations must be considered very carefully to avoid potential overallocation of resources, which could happen if the climate were to return to a drier regime.”

Higgins said the Daly catchment was selected for the paleo-climate reconstruction as more insight is needed for management decisions, particularly in light of proposed future development, but also because conditions in the catchment are changing.

“There are multiple different perspectives on the future development in the catchment. Some people view it as a great opportunity for the region, others see it as a risk to ecological values. But the conditions in the catchment are changing,” Higgins said.

“If we look at the time series of rainfall over the entire instrumental record, we have a significant increasing trend in rainfall, which is thought to be related to an intensification of the Indo-Australian monsoon.

“But, overlying this increasing trend, we have substantial year on year variability, part of that is due to [El Niño-Southern Oscillation]. The north has experienced consecutive years of monsoon failure, in 2019 and 2020.”

Further, Higgins said current data on streamflow in the Daly catchment is not substantial enough for water managers to rely on.

“We only have good streamflow records for the catchment from about 1970, and in the dry season the records are quite poor. But then we also have years of data that are missing, because we are missing more than 30% of the data during the high-flow season,” she said.

“Sustainable future allocations need to be considered very carefully for this catchment. And getting additional data, such as from the Paleo record, might be really helpful for making those future decisions.”

Higgins said that while a lot of different parameters can be collected from tree rings, the parameter used most commonly is tree-ring width, or the millimetre measurement of each of the annual growth rings.

“We collect data from lots of different trees at each site and combine all that data together, which helps us isolate the common climate signal.”

But, when it comes to reconstructing paleo streamflow, Higgins said things get more complicated.

“Paleo-streamflow reconstructions are not new science, we’ve been using them for several decades now,” she said.

“They have been found to be very useful in understanding natural climate variability within catchments, and to contextualise extremes in the instrumental period, especially for things like drought.

“But, for the Daly reconstruction, we had a number of additional challenges that needed to be overcome before we could produce a robust reconstruction. The most significant of those challenges is that we don’t have many local tree-ring proxies.”

Higgins said there were eight sites with tree-ring chronologies in the monsoon north, but only three that are proximal to the Daly catchment.

“Part of the reason for this lack of data is that many of the really old stands, like cypress pine, have been deforested since occupation. But we also lose a lot of the old trees from natural factors, like fire,” she said.

“While there aren't a lot of local proxies, regionally we have a good network of remote tree-ring proxies. And, due to climatic similarities, trees in the Asian monsoon region can be used to help inform what precipitation was doing in the Daly catchment at the same time.”

While streamflow in the Daly catchment has been increasing, the study confirmed that the past 57 years have included the highest streamflow within the past 600 years.

“We think this information is really important for future management of the catchment, because it tells us that our short data records aren't able to capture natural variability.”

Higgins said the study also uncovered insights regarding the climate drivers that lead to extreme flow events — anything less than the fifth percentile or greater than the 95th percentile of reconstructed flow.

“Warmer sea surface temperatures to the north of Australia tend to result in more rainfall. We also found that high flows are more likely to occur in the catchment during La Niña years,” she said.

“Looking at low flow extremes, cool sea surface temperatures north of Australia are more likely to result in reduced rainfall. But we found no relationship between either high flow or low flow years and El Niño events.

“When we are working in catchments that have a lot of natural climate variability, and are also influenced by anthropogenic climate change, we are not able to properly assess future risks until we understand the base-line variability,” she said.

“How are we supposed to know how much water might be available without understanding variability?”

Header image: Daly River by Stephen Michael Barnett is licensed under CC BY 2.0.

Water Source
Logging in Melbourne’s water catchments could reduce the city’s water supply by 35GL a year by 2050, according to a study from the… Read Full Paper

Water Source
Water quality management has received a boost with the development of a new tool for identifying catchment risk. Read Full Paper

Recovering after bushfire: how technology can help revive catchments and vegetation

Cecilia Harris
The 2019-20 bushfire season left swathes of land across the east coast of Australia with catastrophic damage and, as most water… Read Full Paper
Advertising