In memory of Mark Pascoe

Mark Pascoe, a leading and influential figure in the water sector in Australia and internationally, suddenly passed away on Saturday, 13 August.

His death ends a career of almost 50 years in water management, beginning at Brisbane City Council in 1973 and continuing through to his time as Chief Executive Officer at the International WaterCentre, a position he held until his passing in August 2022.

During the half-century in between, he held numerous senior management, board and advisory roles for several water businesses and research institutions. This includes managerial positions for Local and State Governments and board roles for organisations such as the Australian Water Recycling Centre of Excellence, South East Queensland (Gold Coast) Desalination Company, Western Corridor Recycled Water and Healthy Waterways.

The first several decades of Mark’s career saw him working at Brisbane City Council, from his period working in water treatment and sludge management at the Mt Crosby Water Treatment Plants to becoming Manager of the Water and Sewerage Department. 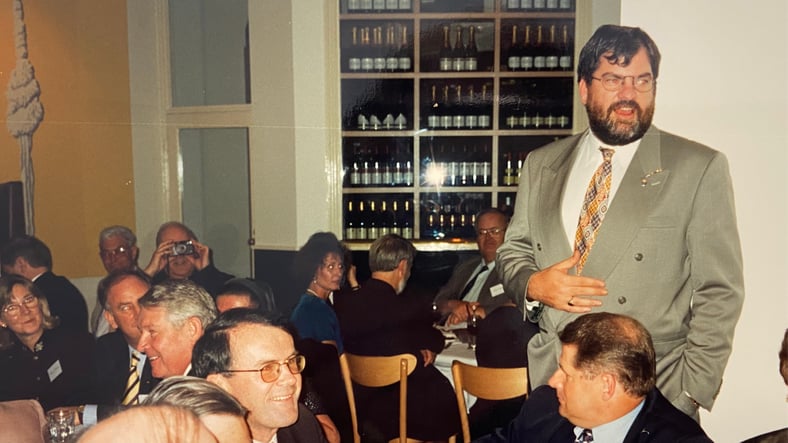 Mark moved abroad for his tenure from 2002 to 2005 as Deputy Director of the International Water Association (IWA) in London. In this role, he worked with in various countries to develop their water industry, including Morocco, South Africa, East Timor, the Solomon Islands, Vanuatu and Vietnam, among other African and Asia-Pacific nations.

“His contribution to the water industry was not only at a national Australian level but also internationally, where Mark is acknowledged as a leader in progressing the cause for improvements in water quality, health and sanitation for all,” said Peter Robinson, AWA Past President (2009 to 2011).

“What an outstanding career - he will be sadly lost by our industry, as will his smiling face and welcoming handshake.”

Mark worked to build the relationship between the IWA, the World Health Organisation, and the UNEP International Environment Technology Centre in Osaka, Japan. His work in assisting developing nations access the water management knowledge and technology of developed countries was immense, meaning his loss is felt globally beyond Australian shores.

Paul Reiter, IWA Executive Director 2002 to 2012, remembered the great impact Mark had in his role there.

“Mark was an integral part of the team that developed IWA after the merger of IWSA and IAWQ.  His breadth of knowledge about all the elements of integrated urban water management was complemented by his understanding of the diverse elements of IWA’s membership which contributed greatly to developing a long-term vision for IWA,” said Reiter.

“The generosity of Mark’s spirit and personality brought so much to the newly emergent IWA team as well as to so many of the members. I believe that Mark will be long remembered by the staff and members that had an opportunity to work with him.” 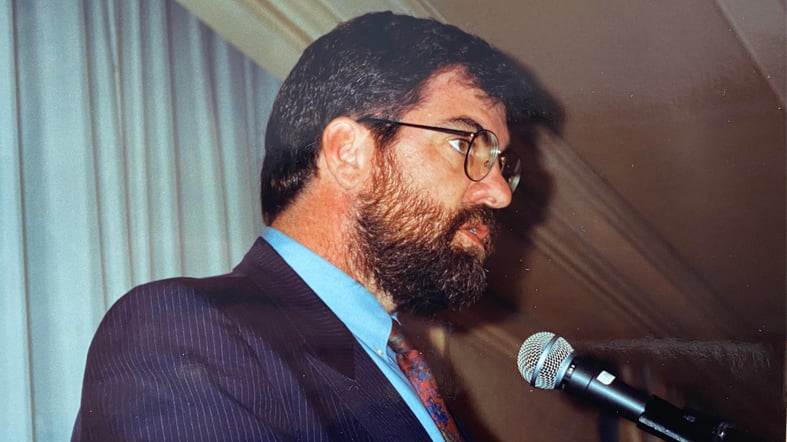 Tom Mollenkopf, the President of the IWA, paid tribute to Mark and his work there, saying “Mark was a great friend, an inspirational leader in the water sector, and a wonderful human being. He served the International Water Association and the global water community with distinction. Amongst his many honours he was an IWA Fellow who brought a great intellect and humanity to international programmes.

“Mark was a wonderful ambassador for Australia globally and was instrumental in taking Australian expertise to the world, including by his leadership in two very successful IWA World Water Congresses: Melbourne in 2000 and Brisbane in 2016 – events that were very much driven by him.

“Rather than quiet, he was a ‘soft spoken’ achiever, shunning the limelight in favour of results. He pursued a powerful global water agenda grounded in justice and equity, with a focus on developing people and delivering on WASH. A great leader and a fine friend who will be missed by many around the world.”

Mark was there at the conception and birth of IWA (serving on the IWA Governing Board from 1999- 2001) and served as the Deputy Director of IWA (2002-2005) in London. On his return to Australia, Mark continued to devote himself to working for IWA – including sitting on the IWA Australia Committee for many years.

“Mark leaves a significant hole in the water industry both from his physical presence and his intellectual contributions which were many and continuing right to the end,” said Peter Moore PSM, AWA Past President (2015 to 2017).

“His life was dedicated to the industry in advocating for it and contributing to bringing new talent into it. He made very significant contributions to the IWA and even more so to AWA.”

Mark made a significant contribution to the water industry for over forty years through his expertise and knowledge of water science, his extensive contacts in the water industry, his ability to simply explain complex concepts and his understanding of the implications of new policy on all levels of government. He was at the forefront in moulding research initiatives and driving new concepts such as “water sensitive cities” both in Queensland and nationally. He provided a highly successful interface between researchers, policymakers and government water leaders enabling him to provide a key role in influencing water decision makers.

His long, devoted career in the water sector included a term as Queensland Branch President and later national President of AWA from 1995 to 1997. He was a member of AWA for over 40 years, served on the Board for eight years, and supported AWA in many ways, including chairing Ozwater 2010 and being instrumental in the bid to bring the World Water Congress to Brisbane in 2016. He was still active on our committees including Ozwater’22, IWA Australia Committee and was also on our member focus group last year to assist in the development of our new CX Platform.

Corinne Cheeseman, AWA Chief Executive has known Mark since the early 2000’s when she became involved in AWA earlier in her career, said "Mark has always been such a strong advocate of AWA, he was a brilliant connector of people and spoke about the friendships he made throughout his career. He continued to give his time to AWA, and would often pick up the phone or drop me an email. His knowledge and experience were incredible but you always felt at ease with Mark. Mark’s warmth and generosity of spirit, beyond all that he achieved during his career in water, is what I will remember most."

Greg Cawston, his immediate successor as AWA President from 1997 to 1999, remembered Mark as a luminary of the water industry, providing massive influence both nationally and internationally.

“I was very fortunate to learn from, then directly follow Mark as AWA president,” said Cawston.

“Mark had the perfect blend of an inspiring leadership style, vast technical expertise and calm and nurturing personal qualities.

“You always felt better after spending time with Mark.” 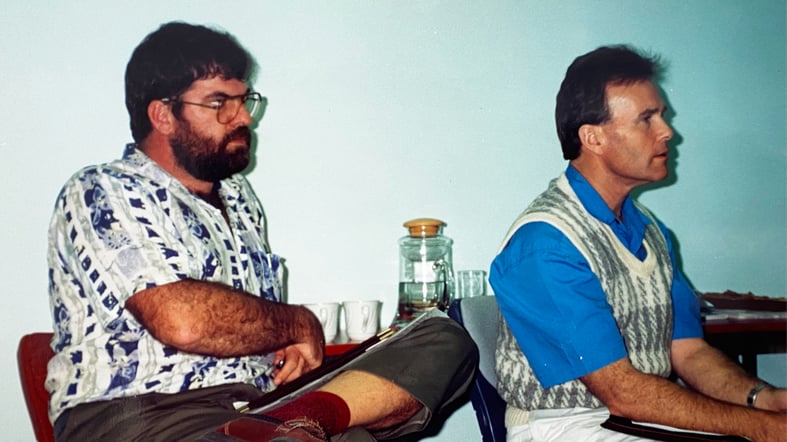 His recent work at the International Water Centre, firstly as Deputy Director on his return to Australia from London and then as CEO, saw Mark play a key role in establishing water projects and training programs in Australia and internationally. These programs’ success is a tribute to his ability to bring people together to share knowledge and skills.

Dr Sandra Hall, General Manager of the Australian Centre for Water and Environmental Biotechnology at the University of Queensland, remembered Mark as a “passionate leader who made an enduring impact on the industry”.

“His support for the development of the industry and its professionals touched so many of us around the globe,” said Dr Hall.

“As a mentor, Mark gave his time so generously and was there for every one of my milestones with support and encouragement, even when I was making a poor choice. I am forever grateful that Mark was a part of my life, my success and achievements are shared with him. I will miss my friend and mentor.”

Mark was a keen and committed mentor to young and inexperienced people starting their careers in water. This was embodied in his crucial role in establishing the International Water Association’s Young Professional Program in 2003, which developed a strategy and business plan to ensure young people entering the water sector were attracted, engaged and retained.

“His contribution to AWA over the years has been immense but always with great modesty,” Lehman said. “He has always been a great mentor for the younger water professionals and always willing to lend a helping hand to those in need.

“He will be sorely missed by his family, friends and colleagues.”

In the immediate aftermath of the news of passing, tributes poured in from across the water sector, as his immense legacy in the field touched so many.

“Mark was an inspirational leader, mentor and friend to the global water community,” said Darryl Day, AWA Past President (2005 – 2007).

“His vision, strategic intervention and courage changed the policy of governments and aspirations of organisations, but his greatest contribution is the friendship extended to everyone he met. Mark’s capacity to connect, and support his extensive network, with empathy and friendship is unrivalled. Mark’s passion was investing in water leaders, who will continue his legacy for generations. He was taken far too young.”

"I am so saddened by the sudden passing of Mark Pascoe, an icon in the Australian and international water industries," said Allen Gale, AWA Past President (1999 – 2001).

"Mark was a giant in the industry, both physically and intellectually.  We served together on the AWA Board and as Presidents from the late 1990’s.  I recall with such fondness the calm nature and sage comment at some time less than calm and sage meetings.  He was a friend forever and I am so affected by Mark’s death." 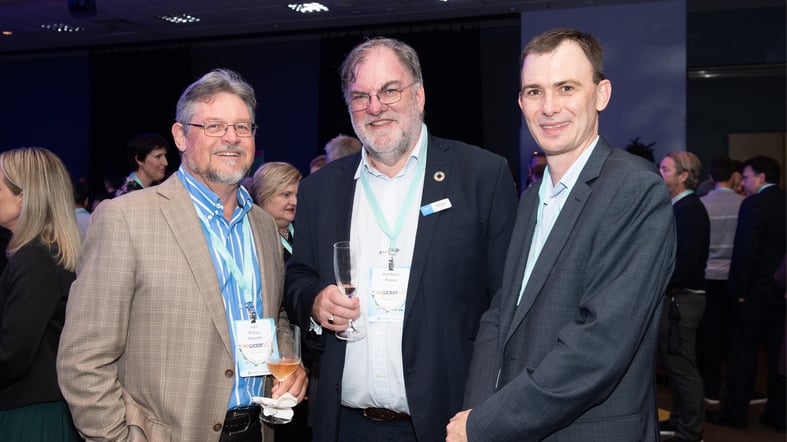 Mark’s warmth and generosity of spirit, beyond all that he achieved for the community, was remembered by all in paying tribute to him.

“He was such an iconic figure in the industry – his wisdom was sought by so many, yet he always remained humble and unassuming,” said Carmel Krogh OAM, AWA Past President (2019 – 2021).

“He was a gentle giant, and I am privileged to have known him.”

Water Source
The Murray-Darling Basin Authority (MDBA) has welcomed a range of government commitments, with the passage of two sets of… Read Full Paper
Advertising