Harnessing the power of volunteer networks

by Jonathan Bradley and Lachlan Haycock 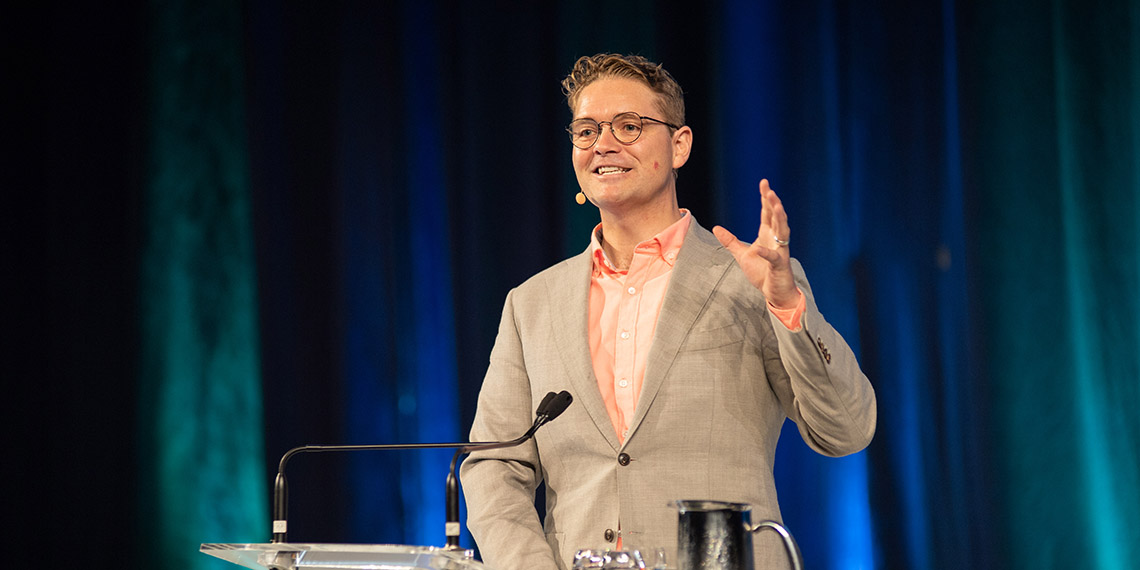 On Wednesday, two keynote speakers brought Ozwater'22 delegates two powerful messages on how to get the best out of people – whether it is catalysing volunteer networks or empowering people with disabilities.

Natural disaster is nothing new for the water industry. From flood to fire, drought to deluge, preparing for the worst and responding after it happens is an all-too-familiar necessity.

It is an experience that Sam Johnson, founder of New Zealand–based community action group Student Volunteer Army has lived many times, first during the 2010 Christchurch earthquake, which inspired him to form the group, and later through disaster recovery work in Japan, Nepal and back home in New Zealand during the COVID-19 pandemic.

Johnson shared these experiences with delegates at Ozwater’22 in Brisbane during his keynote address on day two of the conference, discussing the power and potential of volunteer networks to make a difference.

“People will absolutely sign up to do this if you give them the chance,” he said. “You give them the permission and opportunity to have a go at volunteering, they will sign up in droves and have a good time.”

It was something he first realised during the Christchurch earthquake, when houses throughout the city were strewn with silt and debris in the aftermath of the disaster.

“The silt really just popped up and bubbled up out of everywhere, through floorboards and old boarding houses,” he recalled.

“I thought I'll do something to help, so I started a Facebook page, and I thought, I can at least get 12 friends to go along and help clean up this mess in a little way for a couple of people.”

People shared an invitation to that Facebook page, and Johnson found himself with a lot more than the 12 friends he had hoped to recruit.

“We got 30,000 people on the Facebook page over the next series of earthquakes from September through to February,” he said.

“I said, ‘turn up with a shovel … and let's go and shovel some silt’. And it was the most moving, incredible project and most meaningful experience that many of us had while at university. It was absolutely incredible.”

The enthusiasm in the community resulted in so many volunteers that Johnson struggled to find ways for them to help. For him, that became a lesson in the power of logistics — a factor that has become particularly important as Student Volunteer Army has expanded to encompass 11 staff, six university clubs, and a presence in Auckland as well as Christchurch.

“It's much more complicated to actually do that on a mass scale with the number of crises and disasters that we have,” he said.

“The most complex part of our work is how we stay nimble enough to actually do that sort of stuff while looking after people properly.”

Student Volunteer Army, befitting its name, does not only confine its activities to university campuses. Johnson said the organisation focuses on primary and secondary schools as well — with good reason.

“We've had more than 120,000 students at primary age from five to 12 run through our student volunteer program for primary kids.

The program allows the participating students to self-organise a project in their community.

“They get together, and they have to find a project, build a team and a plan and run a project and share what they learned with the community and reflect back on it,” he said.

“We basically focus on teaching project management to little kids and seeing and making them to organise it themselves.”

Johnson had first realised the power of youth involvement in organising while he was in Japan helping with recovery efforts after the 2011 Tohoku earthquake and tsunami.

“While I was there, this really poignant story from a group of primary school kids really struck me,” he said.

“It was the story of a teacher evacuating their kids from their bottom-storey classroom in a three-storey building to the roof. They’d recently learned about the power of earthquakes and tsunamis in Japan and the risks.”

Sheltering on the roof, the 12-year-old students observed to the teacher that they would not be safe if the impending wave were as big as previous tsunamis.

“They convinced their teacher to take their 300 kids that were on the classroom down the flights of stairs, and run up the hill on the side, and in a pretty short space of time they watched their big government classroom get washed away,” he said.

“That completely inspired me about what we do.”

When the COVID-19 pandemic first arrived in New Zealand, Johnson knew he needed once more to draw on his experience preparing helping communities respond to crisis and disaster.

Noticing that food delivery systems were becoming overwhelmed, he set about activating once more his volunteer networks.

“We scaled our team from having three people to having 93 —largely through Instagram and Facebook — we recruited 3000 volunteers and delivered groceries right around New Zealand,” he said.

The lesson he’s learned from his experience in volunteering is to draw on the resources in the community around him.

“We design our organisation to have the energy and space to respond to whatever crisis comes around and to think really carefully about what we can do.”

It feels like there is always another crisis around the corner, he said, but it also allows him to draw on the talents — and the goodwill — of his community.

“It was this amazing feeling when people came to help each other,” he recalled of the Christchurch earthquake. “It gave so many people after that crisis the ability to find a sense of purpose and have something to do.” 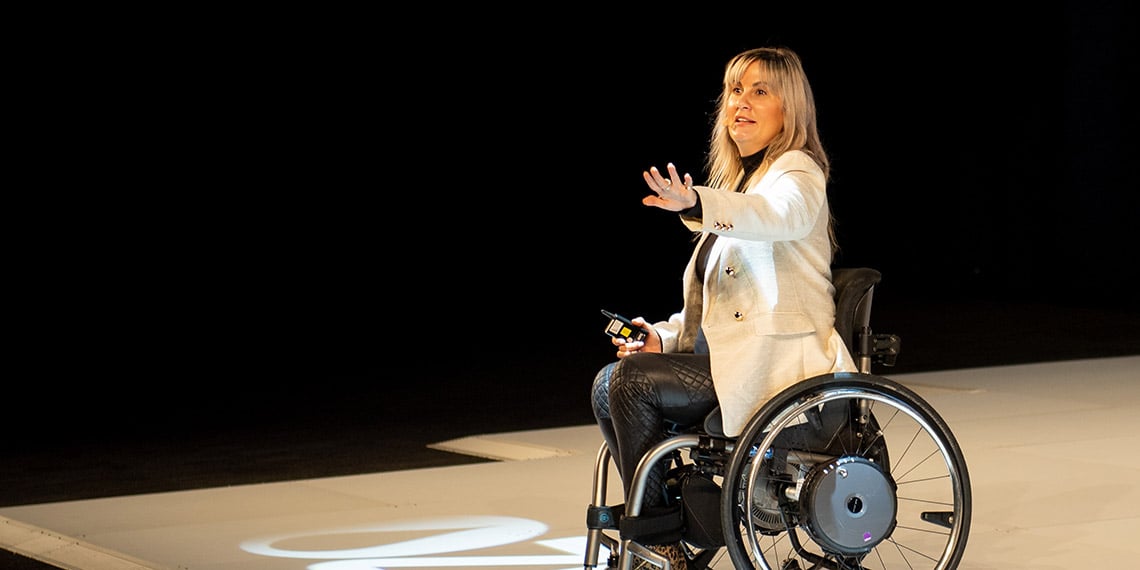 Lessons from a lifetime in the water

She described the impact on her family of receiving a muscle-wasting disease diagnosis during her youth in Rockhampton, the numerous sports she played at school (from swimming to horseriding to trampolining), and the ups and downs of a lifetime spent in the water.

Having been “dealt the disability card” early in life, Liddell drew on extensive personal experience to illustrate the power that comes from claiming a label for oneself.

“Every single one of us should have a choice in life,” she said. “Our choices should not be dictated by those cards dealt to us at birth that we have no control over.”

Her pursuit of the elusive blue first-place ribbon handed out at swimming carnivals proved so tempting that at the age of eight, she told her parents she wanted to swim professionally.

“The label of being ‘lesser than’, ‘different’ or ‘not wanted’ starts really young,” she said. “[But] when I told my parents I wanted to do this, I found my own label.

The anecdote-filled session was not without challenging statistics – four million or 20 per cent of Australians have a disability, Liddell said, and they are currently “in fight mode” as they look to bolster support for the at-threat NDIS.

She also did not shy away from making the audience feel uncomfortable.

“It's really interesting how our goals and dreams sometimes don't match our bodies or our finances or our families’ ideas of what we should do,” she said. “Why is it that Australians think that it’s typical or expected for a person with a disability to be a Paralympian?”

Now, almost 20 years after retiring, Liddell works in domestic and family violence against people with disabilities, an intersection she feels a responsibility to engage with.

She is also NDIS Advisor to the Department of Communities and Disabilities.

The Paralympian ended the session with a powerful call to action, describing how, as a result of decades of communication with doctors about her daughter’s diagnosis, Liddell’s mother helped to “change how we diagnose children's muscle diseases in this country and perhaps the world”.

“For 15 years my mother sat in her lounge room with an envelope, scissors and a stamp, sending press clippings to the doctor,” she said.

“Her name has made it into medical journals – and she’s a woman from Rockhampton who finished school in Grade 10.

“Whenever you think you can’t help, you could be the Terri Liddell in someone’s life. The smallest of acts can create the largest of impacts.”

Water Source
Despite being home to Southeast Asia’s largest economy, Indonesia is still striving to provide clean water and sanitation to its… Read Full Paper 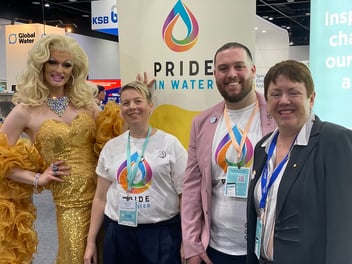