Infographic: A recent history of the Murray-Darling Basin

Here are the key developments, along with some statistics you might not know.

The River Murray Waters Agreement is reached, setting out the shares of water available to each state.

The River Murray Commission is established to oversee the agreement.

The Murray-Darling Basin Agreement is established, superseding the River Murray Commission and taking a broader scope.

The Council of Australian Governments (COAG) agrees to the National Water Initiative, elevating the importance of sustainable use of water resources. The National Water Commission is established to implement it. 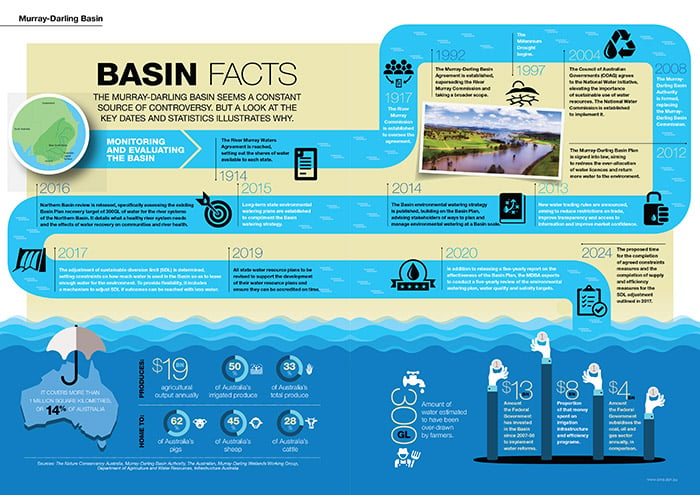 The Murray-Darling Basin Plan is signed into law, aiming to redress the over-allocation of water licences and return more water to the environment.

Northern Basin review is released, specifically assessing the existing Basin Plan recovery target of 390GL of water for the river systems of the Northern Basin. It details what a healthy river system needs and the effects of water recovery on communities and river health.

The adjustment of sustainable diversion limit (SDL) is determined, setting constraints on how much water is used in the Basin so as to leave enough water for the environment. To provide flexibility, it includes a mechanism to adjust SDL if outcomes can be reached with less water.

In addition to releasing a five-yearly report on the effectiveness of the Basin Plan, the MDBA expects to conduct a five-yearly review of the environmental watering plan, water quality and salinity targets.