During the Yorta Yorta Native Title case in 1998, a confederacy of these First Nations was formed that would ultimately become the Murray Lower Darling Rivers Indigenous Nations (MLDRIN).

Its core role is not only representing the water rights of First Nations in the Basin, but for traditional owners in the Basin to support and acknowledge each other.

“Unlike New Zealand, we don’t have a treaty here, so it’s much harder to negotiate on equal terms with a settler colonial state that says that it owns all the water and all the land,” said MLDRIN Executive Officer Will Mooney.

Despite this, the confederacy has seen some success with the Victorian Government and water authorities.

“Some of them are starting to recognise they are working on Aboriginal country, on waterways that have cultural heritage significance, and understanding the impacts of how delivering on the demands of their customers could potentially improve outcomes for Aboriginal people.

“One priority for MLDRIN is to see Aboriginal people empowered to manage water themselves. We don’t want to see just non-Aboriginal water managers and frameworks drawing on Indigenous knowledge or appropriating that, or taking it out of its context.”

Mooney said incorporating Indigenous knowledge should be about empowering communities to become part of, and lead, water management plans.

“We want to see the First Nations given opportunities to mobilise their own knowledge and do water management themselves,” he said.

“That’s about better environmental outcomes as well as social and cultural outcomes.”

Joshua Hoey
While Australia's First Nations own 20% of the country's land, they control less than 0.1% of Australia's water resources. Joshua… Read Full Paper 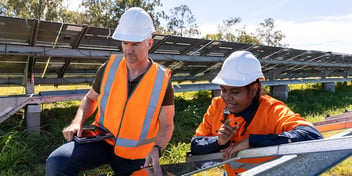 How a new partnership is elevating First Nations' expertise