Highlighting the challenges we face in achieving water for all, water activist and Thirst CEO Mina Guli left Ozwater’19 delegates inspired with stories gathered on her journey to run 100 marathons in 100 days, in 20 different countries.

In a breath-taking effort to raise awareness of Sustainable Development Goal 6 (SDG 6), Guli embarked on the remarkable campaign to show the world the kind of commitment required to achieve the goal.

“People who don’t know me told me I was a lunatic; who on earth wants to run 100 marathons in 100 days? I wanted to show what it means to be 100% committed to something,” Guli said.

“It was my goal and ambition to run 100 marathons, in 100 days, with 100% commitment. I actually also wanted to show the power of every single one of us to get out there and make a difference in the world.”

Guli’s route started in New York City, touring the globe through multiple continents and water-stressed countries, and included many conversations with members of local communities.

While Guli has embarked on two other international running campaigns for water, she was inspired by the size of water shortage issues to tackle the 100-marathon challenge.

“We came up with a route that was designed not only to highlight the problem, but to connect people to it in a very human way, and to start to inspire communities to rise up and say, ‘We care about water too’.

“In France, I met farmers who were stressed with groundwater contamination issues. In Italy, I ran through villages and met thousands of children who were telling me they cared about water too.”

On day 62, Mina received medical advice that if she continued the campaign, her leg injuries would become life changing and she would no longer be able to run.

“Something terrible happened to me, but something really brilliant happened for water,” Guli said.

The international community of runners following Guli’s efforts stepped up to run in her stead, which lead to growth in the campaign’s breadth and depth.

“People rallied around me. People around the world were logging miles for me, people who understand that this is about all of us. I am absolutely humbled at their generosity in helping solve our water crisis,” Guli said.

“If this is going to affect so many people and have such an economic impact on us, how is it possible that saving water isn’t being talked about?

“After thousands of miles and many, many conversations, I realised that part of this is about us thinking water is not our problem, but someone else’s problem.”

Guli said the solution to the challenge of ensuring the provision of water for all is about effective engagement.

“To do that, to actually shift this dialogue, we need to build this community of people who are connected to the problem and who care. There are lots of people all over the world who are ready to stand up and say, ‘I care about water’.”

Day one of Ozwater'19 might be finished but the conference is far from over! Don't miss tomorrow's keynote speakers, Craig Reucassel, Macinley Butson and Iain Walker. View the full program here. 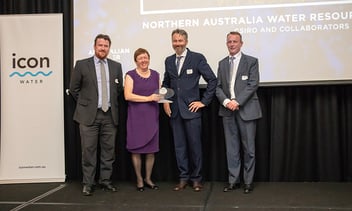 Cecilia Harris
Bellarine Peninsula farmers will soon have access to high-quality recycled water thanks to an $11.1 million investment in upgrades… Read Full Paper