The buzz might be about “Green Book” being named best picture, but Wannon Water is celebrating its own win at the Academy Awards of water.

After being crowned Australia’s best tasting tap water in October, the Victorian utility took the silver medal in the ‘best municipal water’ category at the International Water Tasting Competition held in Berkeley Springs in the US recently.

Ten judges sampled water from around the world, rating each on taste, appearance, aroma, mouthfeel and aftertaste.

Wannon Water came in behind reigning champion Clearbrook Waterworks in British Columbia, Canada, which has won the most medals in the event’s 28-year history.

Wannon Water’s entry was sourced from the southern ranges of the Grampians National Park before being treated at the Hamilton Water Treatment Plant. Managing Director Andrew Jeffers said the recognition was a coup for the region.

“It’s not just an honour for Wannon Water but a win for the entire area, giving people a great reason to visit, live, work and invest in Hamilton, Dunkeld and Tarrington.”

However, Jeffers said there is still work to be done to ensure all Wannon Water customers enjoy the same tasting tap water.

“We … still have work to do to provide a similar level of satisfaction about the taste of water to customers in all our supply systems,” he said.

“For example, water in Portland, Port Fairy and Heywood is supplied from a deep aquifer, and although it is safe to drink, it contains many natural minerals that can affect taste and smell.”

Jeffers said Wannon Water is planning improvements to its water treatment infrastructure across the region over the next four years. 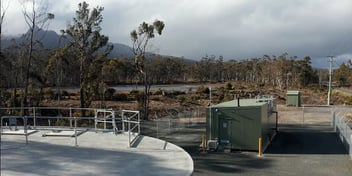 Cecilia Harris
Water from a small regional town in Tasmania has been declared the best tasting in the world, with TasWater’s Rossarden Water… Read Full Paper

Does Australia have the best water in the world on tap?

Water Source
TasWater is vying for the title of Best Water in the World after shipping out a sample from its Barrington water treatment plant. Read Full Paper
Advertising