How do you engage with a non-existent community?

Community engagement is a core tenet of every water utility’s operating model. But what do you do when there is no community to engage with?

This was the unusual position a team from South East Water (SEW) found itself in when it set out to create Aquarevo, Australia’s most water-efficient urban housing development.

With no land bought or homes built, the utility needed to broaden its usual strategy in order to gather information from the public.

The project, which is a collaboration between SEW and Villawood Properties, features a range of sustainability initiatives, including slashing residents’ reliance on drinking water by up to 70%.

This will be achieved in part by plumbing 460 homes in the development with three sources of water: drinking water, recycled water and rainwater.

“One of the main engagement challenges for the Aquarevo project was that we were building a water recycling plant in the middle of the development,” Glass said.

“It’s not like most traditional wastewater removal where it’s taken off site to a different area – the plant is going to be next to somebody’s house.”

She said this made engagement more important, as potential purchasers needed to know from the start if their property was close to the plant.

Because there was no customer base to speak to, the utility began by reaching out to the wider community to find out what mattered to them. This included creating an online hub, where it provided information about Aquarevo and the water recycling plant, and answered questions.

“We were also lucky in that for every development, the housing developer (in this case Villawood) has an expression of interest register,” Glass said.

“We asked Villawood to engage these people on our behalf, so we could get information to them about some of the engagement activities we were running in the area.”

The utility also commissioned a Melbourne company to build a virtual reality model of the water recycling plant. In addition, it developed a simple infographic to explain how water enters the plant and is treated to a Class A recycled water standard before being sent into homes for use in the toilet and laundry and on the garden.

From the engagement activities, Glass said the team realised most people were unconcerned about the plant.

“Before people were allowed to purchase land at Aquarevo, they had to go through an induction process,” she said.

“During that process, all the water initiatives were explained to them … We engaged them at that point about the water recycling plant being part of the development.”

But for the utility, Aquarevo is about looking at innovative ways to future-proof Melbourne's water supply.

“At the height of the drought in 2011, we at SEW decided we wanted to do some research into water saving initiatives, especially for urban developments,” Glass said.

“We were concerned about the effects of climate change, and we were looking at other ways, instead of in 20 years having to build another desalination plant when our population had grown and we don’t have enough drinking water sources.” 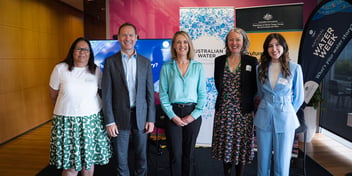 Cecilia Harris
Deep levels of community engagement are a necessity when it comes to meeting the challenges facing water, and National Water Week… Read Full Paper

The innovative ways utilities are encouraging customers to save water