Water is probably not the first thing that comes to mind when you think of central Australia – more likely you’re picturing that iconic red dirt, endless blue sky and Uluru. But the region is home to hundreds, if not thousands, of water holes.

Some, like those in the MacDonnell Ranges, are firmly on the tourist track, while others are so small no one even knows they’re there. But all of them can tell us something, which is what the Outback Water Project (OWP) is all about.

Using an army of citizen scientists, including residents, tourists, pastoralists and Indigenous rangers working on Country, the OWP aims to collect water samples from as many of the region’s water holes as possible in order to measure the conductivity and stable isotopic composition of each.

To get involved, members of the public collect a kit containing vials and instructions from the Alice Springs Visitor Information Centre. While travelling through central Australia, they take a water sample from any water source they come across, date it, note detailed location information and return the sample. These are then sent to Professor Jenny Davis, head of the School of Environment at Charles Darwin University, for testing.

The project is a collaboration between Territory Natural Resource Management (TNRM), which is funding the project, and Charles Darwin University, along with secondary partners Tourism Central Australia and the Parks and Wildlife Commission of the NT, and is managed on the ground in Alice Springs by TNRM Tablelands/Arid Lands regional coordinator Jon Hodgetts.

Hodgetts is originally from the UK and said his interest in the environment led him into natural resource management and to life in the Northern Territory.

“I fell in love with the region first and foremost. Working on such a large scale with such a small population, there’s a greater sense of ownership and connectivity to the landscape here that we’re working to protect and manage,” he said.

Protecting the landscape means understanding it. While there are water holes in central Australia that are well understood, the OWP includes sites that have never had scientific analysis.

“We have perennial water sources and water holes, and some of those are popular tourism spots … But there’s a lot more water across Indigenous land that we don’t know too much about,” Hodgetts said.

“We don’t know whether it’s groundwater, whether it’s recent rainwater, and so using the OWP we’re encouraging people to collect samples from any standing water sources they see.”

Around 250 samples have been returned so far, which have been taken from roughly 50 different sites. Davis has so far analysed 30 of these samples, collected between December 2017 and February 2018. They reveal central Australia has some of the freshest water on the planet in terms of salinity (or lack thereof).

Penny Springs in Watarrka National Park was found to have a salinity level (measured as electrical conductivity) of 0.09mS/cm, while Chain of Ponds was next at 0.10mS/cm. For comparison, drinking water guidelines require water to be 0.8mS/cm or lower to be fit for human consumption.

Hodgetts said they should start to see more variety in locations once the Territory gets its first set of good rains later in the year, but that the study will never be comprehensive.

“There are so many sites around the region, they number hundreds, possibly thousands, but some of them must be so discrete and so small. We’ve only got so many roads in central Australia, so many dirt tracks, so many walking tracks, that there will be plenty that are never sampled.”

Those that are sampled could help tailor where certain TNRM projects happen in the future. Hodgetts said identifying groundwater-dependent sites is particularly important, especially if it is a site the team didn't know existed or didn’t realise was groundwater dependent.

“Those are the sites that we ultimately have the most interest in, because they probably have some groundwater-dependent ecosystems that exist above them, they probably have greater cultural significance … That’s what we’re looking for – those sites in the system we can see provide drought refuge and would’ve had massive significance over the last X number of years.”

Beyond the data, Hodgetts said public education and engagement with water is an important aspect of the project, particularly in such an arid region.

“I’ve been astounded at how much reach and interest there is, and I think just having this project out there and having people talking about water in central Australia is a huge win. As residents, all our drinking water comes from subsurface aquifers, so people don’t really have a conscious relationship with water – we turn on the tap and water comes out, but we’re not thinking about the sources,” he said.

“In natural resource management, it’s important that people engage and have a concept of environmental asset management – what we’re doing and why. This project is trying to get people to start thinking about water in central Australia and what it means. To be more aware of the different sources of water and its importance to the landscape and how it can change.”

If you're interested to learn more about the current and future state of water in Australia's north, consider registering to attend NT's Water in the Bush Conference on 19 October in Darwin. 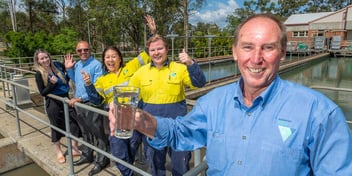