Call for water policymakers to give Aboriginal people a say

Research coming out of the University of Canberra will aim to give Aboriginal communities a say in how water is managed across Australia.

Brad Moggridge has been nominated for an ACT Water Leaders Award for his research into how governments and policymakers can incorporate the cultural values and perspectives of Aboriginal people into modern day water planning.

“Under the current water management regime, [Aboriginal people] are just add-ons and we don’t really have a fair say or get a fair share of water,” Moggridge said.

“My aim is to look at how cultural values can be included and influence western water management because when you really look at it, Australia hasn’t managed its water that well.”

Moggridge said policymakers are turning their backs on the expertise of Australia’s original custodians.

“Australia is a dry continent and you have the oldest living culture on the planet, and yet [Aboriginal people] don’t have a say in when and where water flows.”

One of the biggest challenges, Moggridge said, is in addressing how Australia views Indigenous people and their knowledge of the land and water. When water was first being allocated, Aboriginal people were still considered flora and fauna and weren’t counted in the census.

“Now that we’re considered human, all the land and water is gone,” Moggridge said. “We don’t have any water because when you look at the basins, they’re either fully or over-allocated. If Aboriginal people want water they have to go to the water market and buy it.”

Moggridge has focused his research around the Barwon-Darling River and the Gwydir River because he believes these systems show the greatest potential for Aboriginal watering opportunities.

“It’s about working with Aboriginal people around what their values are so that can be modelled and potentially allocated for,” he said.

“When the Murray-Darling Basin Plan was being prepared, they based it on the best available science and credible evidence. We have traditional knowledge and oral tradition, so we didn’t have any big reports to bang on the table like other water users do,” he said.

“I suppose what I’m doing is giving an Aboriginal voice to this research and validating some of our science because we haven’t had that opportunity.”

Moggridge is looking forward to the ACT Water Leaders Dinner and Awards as a chance to raise his profile and find more supporters to “help fight the fight”.

“It’s a great opportunity for a new set of ears,” he said. “It’s quite lonely being an Indigenous water specialist because we are pretty rare. Hopefully I can get some more support.”

The ACT Water Leaders Dinner and Awards will take place on 7 September. Click here to find out more.

Cecilia Harris
As Australia edges closer to national water reform under the new federal government, the Northern Land Council is calling for a… Read Full Paper 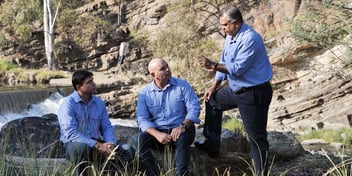