Reflecting on two decades’ worth of custom design and manufacture of water infrastructure, the Managing Director of one of Australia’s leading providers says when it comes to water, challenge spurs innovation.

With experience designing and installing infrastructure solutions for irrigation, wastewater management, desalination, dams and flood mitigation, AWMA Water Control Solutions is a company that has seen (and designed solutions for) many water challenges.

Established in July 2000, AWMA has been delivering specialised water control infrastructure to domestic and global markets for 20 years, including the design, manufacture and installation of water control gates, flood barriers and self-cleaning intake screens.

AWMA’s Brett Kelly said one of the biggest differences the company has seen, in terms of water infrastructure and innovation, is the huge push towards customised solutions that blossomed during the Millennium Drought.

“Gates used to be something that you bought out of a catalogue, like a pump or a valve. There were standard sizes and standard models. What seems to have happened, and what we've helped facilitate, is the turn to customised solutions to accommodate site specific challenges,” Kelly said.

“We've become integrally involved in the whole solution compared to when we first started. And the Millennium Drought was probably the biggest influence the Australian water industry has ever had in terms of a catalyst for change.”

Kelly said the Millennium Drought kicked water saving, monitoring and mitigating into gear, which resulted in the creation of solutions that proved to be helpful within broader contexts, too.

“During the Millennium Drought, we were the busiest we've ever been. We were providing solutions that had never been needed before. We went through a rapid change,” he said.

“When we started working in other water industries, we incorporated a lot of the innovation and lessons learnt from developing solutions for irrigation during the drought – not just in terms of products, but also the way of thinking."

The evolution of the industry

AWMA is responsible for infrastructure developed for many of the nation’s desalination plants, which are some of the largest, most innovative and highly specialised water control infrastructure.

The company has also worked with the Federal Government to assist with environmental flow technology, Kelly said, as well as with urban councils to mitigate flooding events.

“A lot of our work in the past 20 years has been about the evolution of the water industry and the subsequent need for new innovative water control infrastructure that has come with that evolution,” he said.

“We’ve had droughts, we’ve needed to give the environment some water back, to use urban water more effectively, to use irrigation water a lot more effectively than we had in the past, too.

“All of those things required infrastructure upgrades and product development. A lot of the time, the solution has required products that had never been developed before.”

And if the long list of water-related infrastructure solutions accomplished by AWMA wasn’t already dizzying, Kelly said the company is proud to now be contributing to the health of native fish populations, too.

“Our native fish population is now a fraction of what it was, pre-European settlement. One of the biggest issues has been natural waterway diversion for irrigation,” he said.

“Hundreds of thousands of fish get taken out of their natural environment, every single day.”

AWMA is currently working on the design and development of fish exclusion screens, which keep fish and other native waterway critters out of irrigation pumps, which not only serves fish populations, but benefits waterways and irrigators as well.

“Again, it's just an evolution of people's focus. Then it’s our job to put it all together and find sustainable solutions,” Kelly said.

On the occasion of the AWMA’s 20th anniversary, Kelly said he was proud to be a part of a company that had contributed to Australia’s reputation for first-class water infrastructure solutions.

“I am very proud to have been part of many of the solutions and projects delivered to ensure Australia’s most valuable resources are sustainable,” he said.

“Australia is now seen as a global leader in efficient water delivery and consumption, across all water sectors. At a time when there are universal global challenges with natural water resource availability, it is something we should all be proud of.” 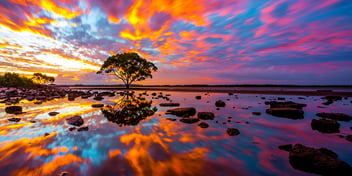 Lachlan Haycock
Let’s say a company commits to making an Acknowledgement of Country at the start of meetings – great. They proceed to formulate a… Read Full Paper
Advertising