As the water sector continues efforts to build relationships with Indigenous communities, one leading Queensland utility has bucked the trend towards employment quotas by facilitating meaningful partnerships that go beyond water sector training.

Aiming to provide holistic opportunities for young Indigenous people who have been recruited from remote communities, Queensland's Utilita developed a pilot program in early 2020 with the coach of the Ipswich Jets rugby league team and Deadly Choices employee Kieron Lander.

Presenting at the upcoming AWA Queensland Conference on Utilita’s Indigenous engagement pilot program, Operations Manager Chris McRae said the success of the program can be attributed to the guidance Utilita receive from a trusted community leader.

“The program started via a relationship we have with Keiron Lander, who is the head coach of the Ipswich Jets, and he also works for Deadly Choices, as an Indigenous health officer and an Indigenous ambassador,” McRae said.

“Initially, we started talking about the goals of Reconciliation Action Plans. We decided to take a different approach to how we could achieve these goals.

“We discussed Keiron’s work in Indigenous mentorship and he introduced us to two young men from Lockhart River and Doomadgee. These young men were on a preseason in one of the strongest rugby league competitions in the world.”

McRae said the pilot program started small to focus on how it would be run and what would be involved, making space for learning along the way.

“The idea behind the original pilot program was to give a couple of young Indigenous people the opportunity to get meaningful, stable employment, that was also supported by their rugby league commitments,” he said.

“We have a commitment with the young guys we employ, and with Keiron, that the program is a three-way relationship. It's not an employee-employer relationship. While we certainly employ the members of the program, the relationship also involves a trusted Indigenous community leader.”

McRae said that while Lander helped facilitate the program, he was also integral in guiding Utilita on how to support the young men in their transition.

“Keiron was also an Indigenous mentor for us at Utilita, too. He helped guide us in terms of how to engage with the young men. Do we ask more questions? Do we ask less questions? Do we hold their hand? Do we just let them go?” he said.

“It's been really interesting. Keiron has helped guide us through the process of allowing these bright young men to lead us in terms of what they need to get ahead in their lives.

“We offer a different sort of support. These young men have not just signed up for employment with us, but also to take the opportunity of teaching us about their culture, their community and the challenges they face.

“The answers to these topics are rich and complex, it’s been incredible to learn from them. We now know things about these men and their cultures that we never would have known if engagement had not been structured in this way.”

McRae said keeping the pilot program small at the outset allowed for more meaningful engagement with the participants.

“Starting the program small really helped us ensure that we got it off the ground in a meaningful way. We wanted to ensure these young lads weren’t being turned into an Indigenous employment statistic,” he said.

“The aim was to ensure we were giving them an opportunity to do meaningful work, to develop and grow. But it’s more reciprocal than that. They have taught us a lot too.

“It requires balance. We started out meeting the young men regularly, but then we had to let go and allow them to take control of the direction they were heading in. They have grown so much, but we have, too. It really is a partnership.”

Looking to the future

Following the success of the pilot program Utilita now intends to double the program in 2021, McRae said, and has its sights set on including young women in the program as well.

“We intend now to grow the program, by adding at least another two young Indigenous people to the mix. And, as opportunities open up, we want to keep bringing these guys through,” he said.

“But, one of the biggest things I'm interested in at this stage, is how we can bring in more female participation as well. We are not there yet, but we have a recent agreement with the netball team and we are hoping to be able to include some young Indigenous women in the program, too.”

To learn more about Utilita’s pilot program, register for the AWA Queensland Conference. 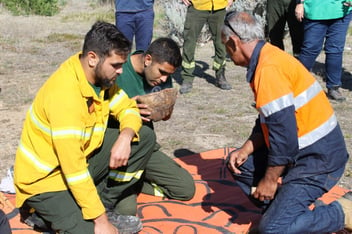