From the Gaza Strip to Brisbane: Memoirs of a young water professional

by Safaa Abdallah and Courtney Brown

Safaa Abdallah, an environmental engineer and young water professional (YWP) from Palestine, has learnt a lot during her Masters of Integrated Water Management.

Speaking with Courtney Brown for the February 2019 edition of Source QLD, she shares how she intends to use the knowledge she has gained to help develop the water industry in her home country.

Understanding the water management and water industry in Australia has brought me into constant comparison with the situation in my home country. The Australian Awards Scholarship provided me with the opportunity to pursue a Master of Integrated Water Management with the International WaterCentre at the University of Queensland.

Prior to receiving this scholarship, I had been working as an environmental engineer for three years in the  Gaza Strip in Palestine. Through my experience of studying in Australia, I have developed knowledge and skills directly relevant to water management and the participatory approaches.

Several Master's courses such as ‘Water, Sustainability and Development’, as well as ‘Water Governance and Policy’ gave me many great insights to analyse the water crises in Gaza Strip and investigate the challenges of achieving adequate water management.

The Gaza Strip is a small, self-governing territory in the southwest of Palestine. Gaza and the West Bank together constitute the State of Palestine. Gaza is a coastal area extending 45km along the east shore of the Mediterranean Sea. It has borders with Israel on the east and north, and with Egypt on the southwest. Two million people live in Gaza in a total area of 365km2, making Gaza the third highest populated city in the world, and it has an annual population growth rate of 2.91% which is the 13th highest in the world.

The Jordan River and groundwater form the West Bank aquifer system, though the entire Gaza Strip lies within the coastal groundwater basin over the coastal aquifer. Gaza Strip constitutes a separate water sector depending only on the groundwater from the coastal aquifer to cover all aspects of life (agriculture, domestic, industry). This single source could not support the vast and sudden rise in population; whereby the absence of sustainable management for the aquifer has caused a sharp deterioration of the precious resource, which is massively overdrawn and exposed to several types of pollution. It is currently estimated that 95% of water from the Gaza Aquifer is unfit for human consumption.

It seems to me that government is the essential force behind successful water policy, strategy, planning and implementation, and the strong governance in Australia comes up with effective strategies. These strategies have been applied through an overarching framework consisting of subsidiary political, institutional and technical frameworks. Also, the representation of various interests in water-related decision-making and the role of power and politics are essential components to consider when analysing governance.

As Palestine is a hot conflict area lacking sovereignty of authority over its own resources (mainly water resources), the unequal power and political context significantly influence the water industry. The struggle over water resources remains one of the most critical factors in the Palestinian-Israeli conflict.

The Palestinian-Israeli conflict is not the only factor that contributes to the fragile governance concept There are also parallel institutions due to the governmental Hamas-Fatah divide from 2007, which resulted in two Palestinian water authorities. Fatah and Hamas are the main Palestinian political parties, and Hamas has controlled Gaza since the internal conflict in 2007.

I personally think inadequate water governance is the main challenge for the water industry in Gaza. Further, the top-down approach is still the main feature of water management in Gaza. Lack of stakeholder engagement in Gaza makes them unaware of the water issues, so they do not provide any support for water initiatives and projects.

There is a great need for a holistic approach to water management across all sectors. Integrated water management is considered the best practice to address complicated water issues and to sustain water for the next generations. The holistic management not only involves the management of natural water resources; it also requires coordination between the range of human resources, and the development of an institutional framework capable of integrating economic, social and political facets.

Stay tuned for more in the Young Water Professional space, as our QLD Source Editorial Committee interviews several temporary Queenslanders, discovering their comparative stories of water governance between here and wherever ‘there’ may be.

238 water stories and counting: Highlights from the 2020 IWA/AWA YWP Conference 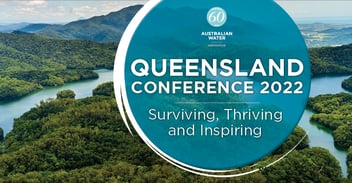 QCon comes but once in a blue moon – and this year it's in Cairns!