The recent change in Australia's government has heralded a renewed focus on national water reform, but with a much more equitable aim — that First Nations peoples’ voices must be heard, acknowledged and incorporated into water planning moving forward.

Held in Alice Springs, the 2022 AWA/WSAA Voices for the Bush Conferences opened with discussion and insights into the urgency of ensuring that Indigenous communities are involved in the design and implementation of policy that affects their lives and livelihoods.

Addressing delegates, Minister for Environment and Water Tanya Plibersek said there’s been a need for strong leadership from government to address climate change and Indigenous water rights, and a need to reestablish a National Water Commission that addresses both.

“There's room for real national leadership here. Before the election, we promised to broaden the investment framework for the National Water Grid Fund to support projects that secure essential town water supplies in regional and remote communities,” she said.

Plibersek said much more is needed to boost First Nation's water ownership rights across Australia, and working alongside Indigenous communities to facilitate this is paramount.

“We need to be ambitious when it comes to First Nations access and ownership of water. We are bringing First Nations voices to the national water reform table,” she said.

“It's a committee of senior Aboriginal water experts from across Australia, providing advice to ensure that Aboriginal and Torres Strait island of people's rights, interests, and perspectives are included in national water reform.”

“I am a Yanyuwa woman, a salt water woman, from Borroloola and the Gulf of Carpentaria. I certainly have a deep understanding and familiarity with the challenges and opportunities facing Territorians,” she said.

“But now it's time that all Australians joined in that conversation because it's going to be important in taking this issue to referendum.”

McCarthy said recognising Indigenous voices in the Australian Constitution is about enabling First Nations people to have a say on laws, policies and programs affecting their day-to-day lives and about driving the change to close the gap.

“It will transform the way governments work with First Nations people, designing policy and partnership with, rather than for, our communities, because we all know that better outcomes are achieved when First Nations people are involved in making decisions on policy that affects their daily lives,” she said.

“Access to water services is a basic right for all Australians or, as First Nations people say: water is life. We're nothing without it. We won't survive. And Australians living in regional, rural and remote areas should not have poorer living conditions than those in urban settings.”

McCarthy said there are more than 70 communities that are known to have recently reported incidents of bacterial contamination or high mineral content in water supplies, which is impacting on the health of those living in the communities.

“Numerous remote communities face challenges with their water supply. Poor quality drinking water, limited access to safely managed water and limited hygiene infrastructure are some of the key factors contributing to an increased risk of infection and disease transmission in remote communities,” she said.

“The 2018 Closing the Gap report found that, in the past 10 years, the lives of Aboriginal and Torres Strait people have improved, but more gains need to be made. It is clear that continued effort and action is required.”

In order to close the gap, McCarthy said we need to develop solutions in partnership with First Nation communities, solutions that integrate cultural, social, economic and environmental considerations.

“It must be a team effort. We must collaborate and engage in multilateral solutions, learn from the experiences of First Nations peoples and their knowledge of Country, and embrace indigenous water management strategies for the benefit of all communities,” she said.

In March 2019, a historic partnership agreement on closing the gap was signed between the Council of Australian Governments and the National Coalition of Peak Aboriginal and Torres Strait Islander Organisations. This set a national, bipartisan guarantee that Aboriginal and Torres Strait Islander people would share decision making with all governments for the second decade of closing the gap.

National Aboriginal Community Controlled Health Organisation CEO Patricia Turner AM, who is the daughter of an Arrernte man and a Gurdanji woman, said recent data collected to measure progress on the agreement reveals that much more work is needed.

“The independent report from the Productivity Commission, tallied against the targets, represented a mixed picture that was not entirely unexpected.

“Few of the 17 targets are on track to meet their trajectories and some have worsened over time. These targets will neither move quickly, nor in the right direction, until all the structural impediments are dealt with.”

Turner said water services and initiatives will have limited impacts unless they are controlled in their co-design and delivery by Aboriginal and Torres Strait Islander organisations with track record authority and relationships in community.

“Aboriginal and Torres Strait Islander people need to be at the center of the closing the gap policy. No gap will close without our full involvement,” she said.

“No one can expect Aboriginal and Torres Strait Islander people to take responsibility and work constructively with governments and other mainstream organisations if we are systematically and structurally excluded from decision making.

“How can Aboriginal perspectives and co-design ever be truly represented and incorporated in policy, technology, and delivery, if we are not at the table?”

Learning how to listen

“Increasingly in Australia and globally, Indigenous knowledges are being recognised as an important factor in human and planet survival,” he said.

“In Australia, the environmental law framework acknowledges the importance of Indigenous knowledge to natural resources management and meeting global challenges such as climate change.

“But such acknowledgment or consultation does not necessarily translate into duties for decision makers to take relevant Indigenous knowledges into account or for Indigenous knowledge custodians to have meaningful input and control over the final outcome.”

Duncan said merely acknowledging the importance of Indigenous communities’ knowledge and practices is not enough to protect their human rights from being violated from climate change impacts.

“Climate change is an environmental challenge that knows no boundaries but Indigenous communities have a heightened risk,” he said.

“There is a lot at stake – and yet Indigenous Australians are often sidelined when it comes to the important work of developing policies and plans to respond to these pressing challenges.”

Duncan said that meaningful consultation with Aboriginal people relies on demonstrating a shared understanding of Aboriginal culture, and the wants, needs and aspirations of Aboriginal communities.

The core values that should be adopted to drive effective Aboriginal community engagement are innovation, integrity and empowerment, Duncan said.

“I believe learning, enquiry and discovery improves lives. We need to work together with Aboriginal communities to assist them to become productive decision-maker communities in the water science arena,” he said.

“We all should conduct ourselves ethically, equitably, and for mutual benefit, inspiring openness, courage and trust.

“We must work with and for Aboriginal stakeholder groups to make their communities a source of strength and creativity. Enhancing the capacity of people and community, in conjunction with the community, can be the segway forward for Aboriginal and Torres Strait Islander communities to make informed choices, and transform them into desired actions, outcomes and success.”

Duncan said good consultation comes down to respect, transparency, honesty and a dedication to improving working relationships with Aboriginal people and communities.

“All people have the right to be consulted with, if the issues affect the place that person or community lives in,” he said.

“Aboriginal and Torres Strait Islander communities have complex knowledges which support and reinforce their relationship and deep connection to Country as the Traditional Owners of their cultural landscapes.

“Over these millennia we have sustainably managed our lands, waters, wetlands and natural resources for the health of our Countries and our peoples. We have understood the importance of water and its centrality to life and have cherished it accordingly.” 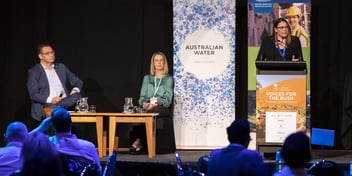 Alex Morrison
At the conclusion of last week’s Voices for the Bush conference in Alice Springs, delegates were left with a discussion on “Keeping… Read Full Paper 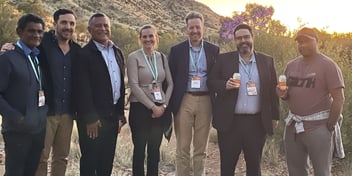 Queensland Reflections on the Voices for the Bush Conference

Carlie Sargent
Representatives from the Queensland Government and Local Councils at the Voices for the Bush Conference Dinner (from L to R: Nic… Read Full Paper