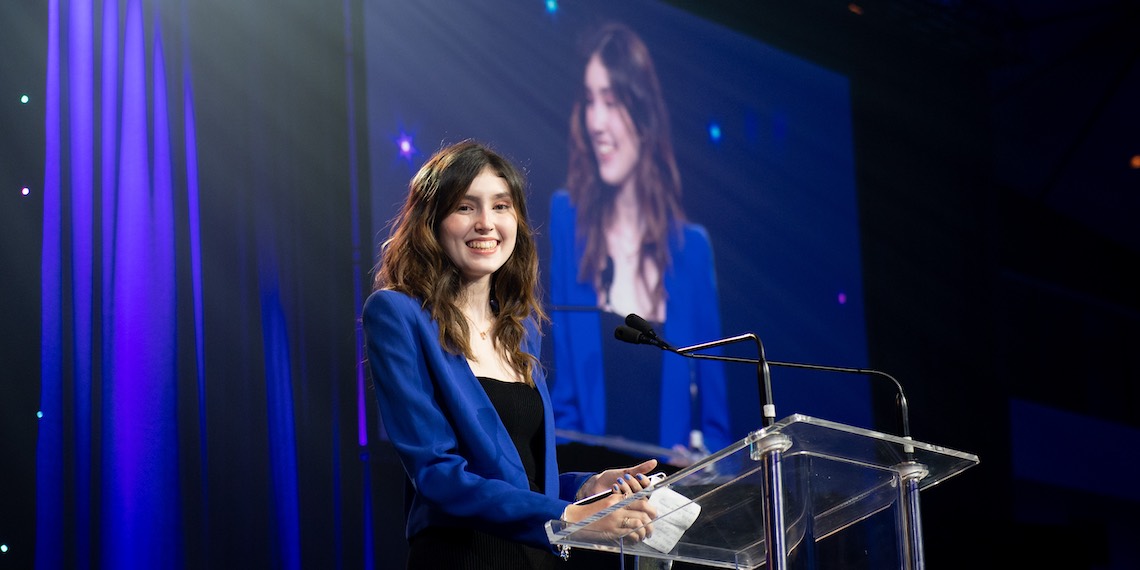 The 2022 winner will be announced in Stockholm — and online — during World Water Week, 23 August to 1 September.

Cummins’s impressive project, Why Silver Might Not be Gold in Water, won the Australian Stockholm Junior Water Prize at Ozwater’22 earlier this year, qualifying her for the international prize.

Voting for the international Stockholm Junior Water Prize is now open and closes on 15 August.

Discussing the motivation behind her work during her project submission, Cummins said she wanted to explore the issue of nanosilver pollution in waterways.

“If you have ever brushed your teeth, worn make-up or used an electric shaver, chances are you have been in contact with nanosilver,” she said.

“Due to its strong anti-microbial properties, nanosilver is used in commercial products, such as textiles, cosmetics, disinfectants and medical equipment. Nanosilver is used in wound dressings, as it has the ability to hinder the growth of microorganisms.

“Nanosilver can enter waterways and aquifers due to releases from both industry and commercial products. Nanosilver is more toxic to cells than macro forms of silver, as it releases higher numbers of silver ions due to its greater surface area to volume ratio.”

Cummins said the project was shaped by her desire to help reduce nanosilver pollution in the environment.

“I am passionate about environmental issues and wanted to find a way to mitigate the impact of nanosilver on the environment,” she said.

“I set out to find a concentration of nanosilver that is not damaging to ecosystems and I achieved this by conducting a bioassay using the aquatic organism Daphnia magna.”

“Each of the nanosilver suspensions was prepared with 10 individual organisms. As Daphnia magna are large enough to be seen by the naked eye, their population could be monitored by taking a photograph and counting the live organisms,” she said.

“The heart rates of the Daphnia magna were measured by observing the organisms under a digital microscope, as the outer carapus is transparent, meaning their internal organs, including their beating heart, can be seen.

“The Daphnia magna heart rate is quite rapid, so using the microscopes recording function, their heart rate was recorded for one minute, and later watched in slow-motion and counted.”

Cummins said the results of her experiment demonstrated that nanosilver has a significant impact on the Daphnia magna: as the concentration of nanosilver increases, the population and heart rate of the organisms decreases.

“These findings indicate that the minimum concentration of nanosilver which causes toxicity is between 0.26 and 0.5 milligrams per litre,” she said.

“In the future, this minimum concentration level can be used to monitor water quality and ensure that health ecosystems can be maintained.”

Cummins is now in the running to take out the 2023 Stockholm Junior Water Prize for her outstanding work, She said she will be attending World Water Week in Sweden later this month.

“I am also looking forward to learning more about the other projects, as even though there is the overarching theme of water issues, there is so much diversity in the ideas and investigations carried out.

“It will be very interesting to talk to the finalists and understand more about how they came up with their project topic and the applications of it.”

Cummins said participating in the Australian Stockholm Junior Water Prize has been an experience that has given her a deeper understanding of the water sector, and recommends other young people interested in water get involved, too.

“It also enabled me to interact with people from other countries and gain insight into the water issues that they are facing, and what they are doing to solve them.

“I would highly recommend other young people to get involved in the Stockholm Junior Water Prize. It provides an amazing opportunity to share your research with a national audience and engage with water industry professionals.

“Before getting involved in the prize, I had very little interaction and understanding of the water industry and what it did, so it was illuminating to gain an insight into the industry and how critical it is.”

Head to the Stockholm Junior Water Prize page to check out all the finalists. Voting closes 15 August.