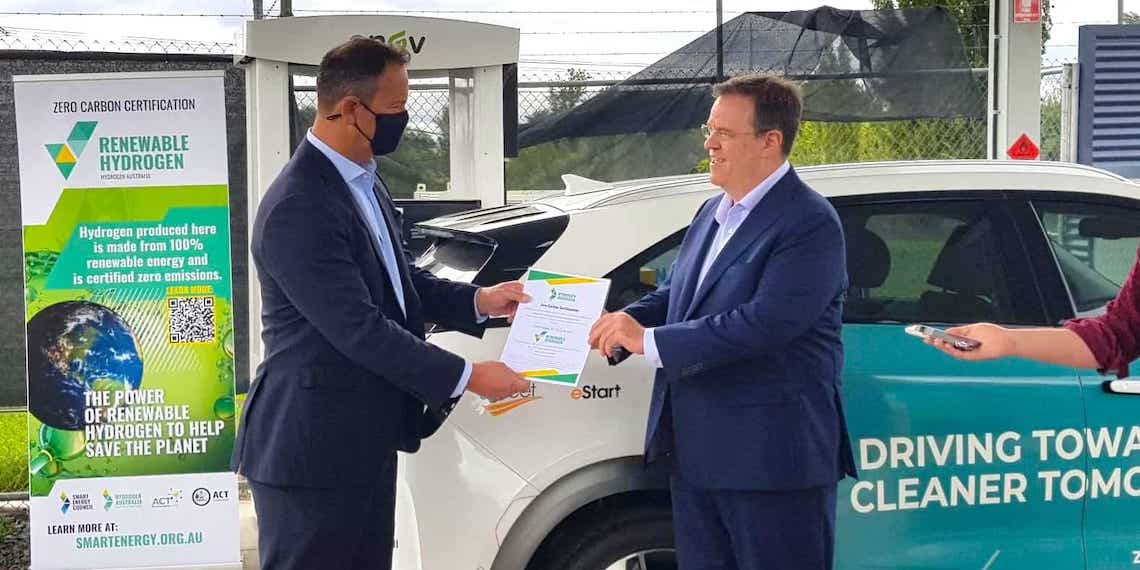 Australia’s first public hydrogen refuelling station has been certified by the Smart Energy Council, with the clean, green hydrogen produced from 100% renewable energy and with zero carbon emissions.

Located in Canberra and delivered by ActewAGL, the station distributes green hydrogen, which  is produced by splitting water into hydrogen and oxygen using renewable electricity through electrolysis.

While hydrogen projects have been gaining pace across the Australian water sector in recent years, including Water Corporation’s fuel-grade hydrogen production at Woodman Point and the Northern Territories renewable hydrogen trial at Tennant Creek, the refuelling station is the first facility to offer 100% green hydrogen to the public.

“We have now certified that it is powered by 100% renewable energy and that it is producing zero emissions hydrogen,” he said.

ACT Minister for Energy and Emissions Reduction Shane Rattenbury said the Zero Carbon Certification Scheme is important, as he believes renewable, green hydrogen is the only hydrogen that should be produced in Australia.

“Any investment in the hydrogen industry should be green hydrogen, that is hydrogen made using renewable electricity,” he said.

“That is why the Smart Energy Council’s scheme is important because it will enable hydrogen and related products to be certified as zero emissions.

“It is critical we can track how these products are manufactured so customers can be certain the product they select is genuinely zero emissions.”

While green hydrogen is certainly the cleanest and most renewable to produce, recent research from GHD suggests the water requirements for 100% green hydrogen may be too high to warrant.

GHD’s water demand assessment suggests that all hydrogen production pathways — green, blue and grey — have fairly high water demands, and that a large-scale transition to hydrogen would need to carefully consider demands on water resources.

Currently, the Smart Energy Council is in the process of auditing Yara’s planned green ammonia plant in the Pilbara to ensure it is built with 100% renewable energy for zero emissions green ammonia.

The ammonia production facility is expected to be pre-certified by 31 July.

Cecilia Harris
Western Australia (WA) may soon be a world-leader in hydrogen production, with a project to produce low-emission hydrogen and… Read Full Paper